The EU and David Cameron - some observations

On 20th October David Cameron was visiting the Ford motor plant in Dagenham, and said this:

'What we need in Britain is a renegotiation of our relationship with the EU and then a referendum where the British people decide do we stay in this reformed organisation or do we leave it.

'That’s what I will pursue, that’s what I will deliver, and at the heart of that renegotiation we need to address people’s concerns about immigration. I’m very clear about who the boss is, about who I answer to and it’s the British people. They want this issue fixed, they are not being unreasonable about it, and I will fix it.'
(Source: The Guardian: http://www.theguardian.com/world/2014/oct/20/eu-leaders-conservative-plan-free-movement-cap-migrants-barroso)

This statement, and others like it, left me angry, but also perplexed. On many of the matters raised, Cameron is either being disingenuous, or he is deluded.

So instead of a tiresome rant, I'm going to try to look, calmly, at the facts.

Firstly, an encouraging fact: at least for me. According to a recent IPSOS-MORI poll, support for staying in the EU is currently at its highest level since 1991: 56% of Britons are in favour of staying in the EU, against 36% who want to leave.

Of course, this doesn't ncessesarily mean that all of the 56% who want to stay are completely happy with the status quo, but it does suggest that the image presented by Cameron of an angry majority demanding radical reform is exaggerated.


Next, let's look at this issue of 'renegotiation of our relationship with the EU'.

For once, I agree with Nigel Farage:
'It is impossible to change the free movement of peoples within Europe without a fundamental treaty change with 27 other European countries. Nobody wants it, nobody is interested, and the prime minister knows it's not possible.'
(Source: The BBC: http://www.bbc.co.uk/news/uk-politics-29642604)

Freedom of movement for workers, and those seeking work, is a fundamental principle of the European Union. It was part of the original treaty of Rome that set up the (then) EEC in the first place, and can now be found as Article 45 of the Treaty on the Functioning of the European Union (TFEU). This is what it says:


1. Freedom of movement for workers shall be secured within the Union.
2. Such freedom of movement shall entail the abolition of any discrimination based on nationality between workers of the Member States as regards employment, remuneration and other conditions of work and employment.
3. It shall entail the right, subject to limitations justified on grounds of public policy, public security or public health:
(a) to accept offers of employment actually made;
(b) to move freely within the territory of Member States for this purpose;
(c) to stay in a Member State for the purpose of employment in accordance with the provisions governing the employment of nationals of that State laid down by law, regulation or administrative action;
(d) to remain in the territory of a Member State after having been employed in that State, subject to conditions which shall be embodied in regulations to be drawn up by the Commission.

Note that this gives freedom of movement, not just to people who are actually working, but those who move to another member state in order to look for work.

The only room for manoeuvre available to the government, as far as I can see, is provided by the qualifier at the beginning of paragraph 3: 'subject to limitations justified on grounds of public policy, public security or public health'. However, it is not clear that this allows sweeping restrictions that act against the spirit of the Article as a whole. This position appears to be supported by the fact that in the resultant legislation, the government uses the phrase quoted in a way that is clearly intended to refer to individuals (see, for example, Regulation 21 in The Immigration (European Economic Area) Regulations 2006).

There is a strange doctrinal conflict in the opposition to the principle of free movement. The most strident arguments against the principle seem to come from the conservative end of the political spectrum. As a rough generalisation, right wing thinkers tend to favour a free market, 'laissez faire', economic system. It is arguable that the EU is a textbook example of a this philosophy in action. And yet the proponents of this approach don't seem to like it so much when it doesn't work the way they want it to. If the free market is so great, why is it not appropriate to apply it to individuals looking for work?

However, whatever position you adopt on the matter, it's undeniable that there is net migration from other EU countries to the UK. But even here, the facts aren't quite how they are portrayed.

The argument seems plausible. The report states that net migration is currently 243,000 people per year. The referendum is due in three years' time. It follows from this that at that point the number of additional migrants will reach... 729,000. OK, that's not a million, but we won't quibble about the odd 271,000.

The figure quoted by Farage is correct, and comes from the Migration Statistics Quarterly Report, August 2014, from the Office of National Statistics. However it needs a bit of unpicking. Firstly, the figure quoted is for all migration, not just that from the EU, which accounts for 131,000 of the total.

Secondly, we need to ask: is the figure of 131,000 typical for recent years? Is it part of a trend? And if it is, where is the trend going? These are tricky questions to answer, partly because the figures from the ONS have a high (but specified) degree of uncertainty*. Here's a chart showing net EU migration over the last ten years. 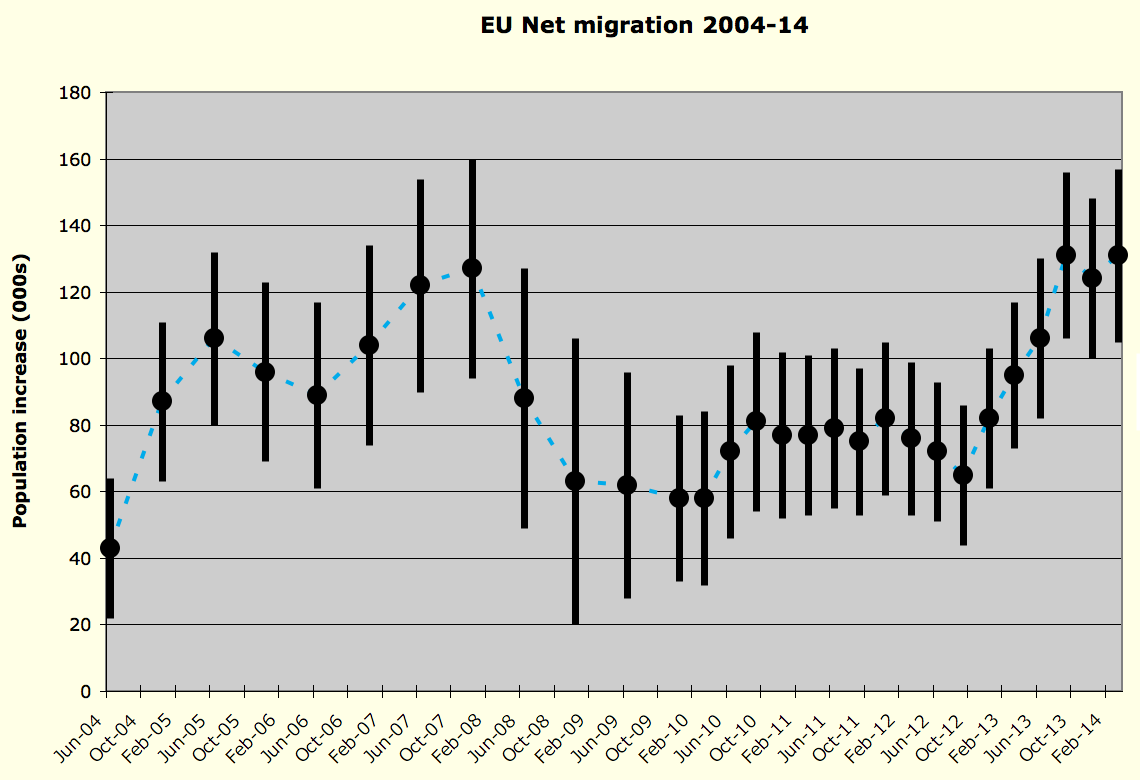 (The error bars are based on the ONS data: according to their analysis, there is a 95% probability that the actual figure lies within the range.)

To be fair to the Euro-sceptics, and even allowing for the uncertainty in the data values, there is an apparent upwards trend over the last couple of years. The last three data points suggest that this increase has stabilised, but at around 130,000. The trend doesn't coincide with any of the big changes in access to the UK market: The last major change before then was April 2011, when the A8 countries (The Czech Republic, Estonia, Hungary, Latvia, Lithuania, Poland, Slovakia, and Slovenia) were given full access to the UK labour market.

On the other hand, a Europhile might argue that it's not possible to extrapolate a clear trend from this data, and would also note that the mean migration rate over both the first five years and the second five years is almost identical, at about 87,000.

In fact you could make either argument from the figures: the truth is we don't know. But I'd be reluctant to embark on major treaty reform on the basis on these figures.

It's also important to look at the bigger picture, that of the overall population growth of the UK. Again, according to the ONS (this time the Annual Mid-year Population Estimates, 2013, published in June 2014), the UK population reached 64.1 million by mid-2013, an increase of 401,000 since mid-2012.

Based on the mean EU migration rate quoted above, it follows that entire net EU migration over the last ten years represents just 1.4% of the current population.

But let's look breakdown the population growth into categories. 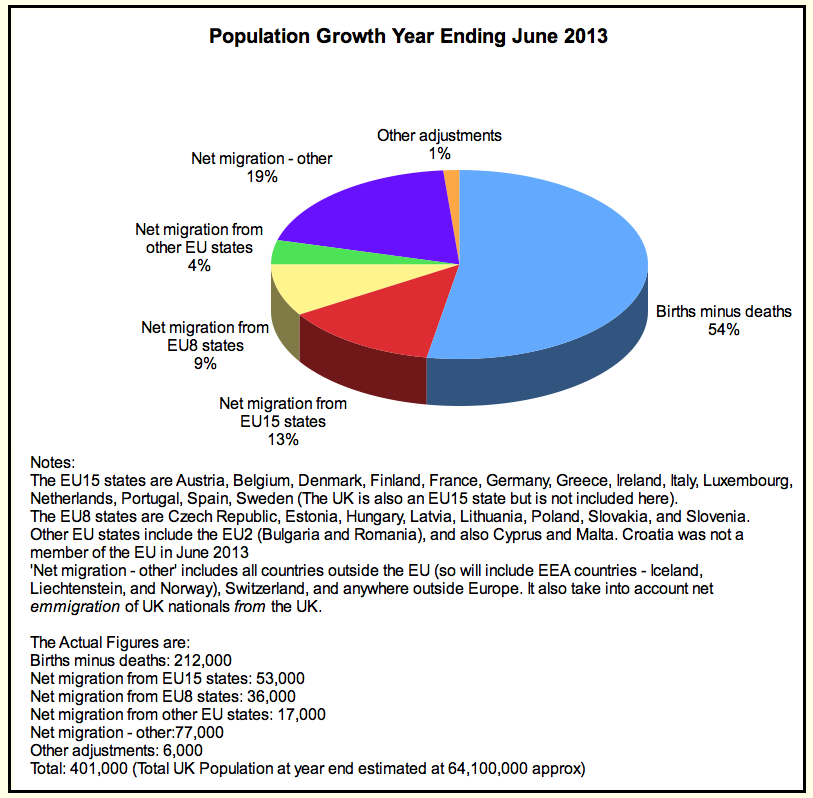 So, yes, EU migration does contribute to the pressure on our housing stock, transport infrastructure, and other resources, but not as much we contribute ourselves.


I have not considered two other issues at all. One is the reality of the restrictions currently faced by EU migrants in the UK: if you want more information about this, have a look at my website - http://www.benefitsowl.info/abroad-eea-cit.html

The other is a question that is rarely considered at all: why is it a given that net migration from the EU is necessarily bad?

I'll leave that hanging in the air.


*The raw migration data (which I've used for this post) is available from a link within the Migration Report, and also here: http://www.ons.gov.uk/ons/rel/migration1/migration-statistics-quarterly-report/august-2014/rft-table-1---provisional-estimates.xls