The Budget and Benefit: Part 2 - some thoughts

In my last post, I laid out the basic information about the proposed changes. In this post I try to flesh out some of detail. I will look at the impact on some claimants, and express some opinions.

First of all, let's look at some concrete examples of how the changes might affect people. I'm not going to express any opinions here: the figures speak for themselves.

Alex and Hilary have three children. It's March 2016. Alex works 35 hours per week, and earns the national minimum wage, 6.70 per hour (it is already scheduled to increase from £6.50 in November 2015. They would also normally receive £48.10 per week Child Benefit (which isn't going to rise for four years).

Let's look at how Alex and Hilary's situation develops:
Here's a summary of how the changes pan out. (the full calculations are available at the end of this post, in case you're interested, as are the assumptions I've used). I have also included the equivalent out of work benefit payable for comparison. For simplicity, I've not included rent or mortgage costs, and all amounts are rounded to the nearest pound.


Now let's look at two other couples:
Here's a comparison of what each couple are likely to get in April 2017:

You will also notice that an out of work couple with three children who make their first claim for benefits after the start of April 2017 will receive more than £60 less than an equivalent couple would have got before the rules changed, a reduction of around 20%, or £3,276 per year

Ahmed single, has no children, and is looking for work. He is on Universal Credit.

Remember that one of the selling points of Universal Credit was that it made the transition into work easier, and made it more worthwhile working. A person on income based Jobseeker's Allowance is, at best, £5 per week better off, no matter how much they earn. If they were on Universal Credit, a specified amount of earnings are ignored: any earnings that exceed this reduce Universal Credit payments by 65p in the pound.

The problem is that, although the amount of earnings ignored for a single, childless, adult, is £111 per month (about £25.54 per week), from April next year it will be zero. 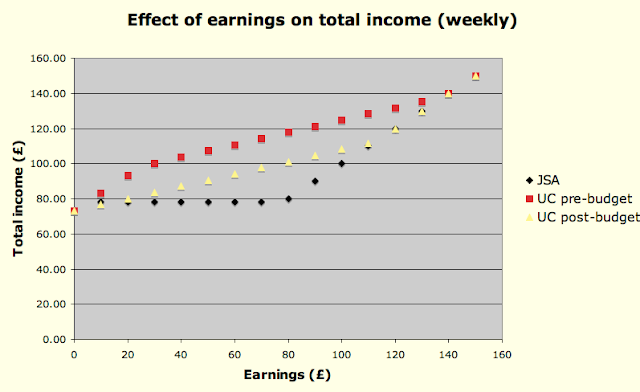 Mmm...
As you can see, for earnings up to about £25 per week, and above around £100 per week, the changes  remove any real advantage gained by introducing Universal Credit in the first place. Between those figures the post-budget version of UC effectively splits the difference. The maximum difference between the JSA rules and the post-budget UC rules is about £21 (and applies to earned income of £80).

Now here's the thing. The earnings disregard has been around for quite a while: Income Support - on which the rules for income based JSA and income related ESA are based - was invented in 1987, and the disregard was £5 then. It hasn't moved. If it had increased in line with inflation it would now be about £12.56. So the best that Universal Credit can offer compared to Income Support at its inception is an £8 per week increase.

For a wider analysis of the financial impacts of the changes, I strongly recommend the following (pdf) presentation by the Institute of Fiscal Studies (IFS): http://www.ifs.org.uk/uploads/publications/budgets/Budgets%202015/Summer/Hood_distributional_analysis.pdf.

The IFS predicts, amongst other changes, that changes to the tax credit work allowances will result in 'just over 3m families losing an average of just over £1,000 per year'.  It also notes that the freeze in benefit rates will result in a cut in real terms of 8% between 2013 and 2020.  And if you are in any doubt of the regressive impact of this and the previous government's policies, check out the graphs on the impact of government policy by income (copyrighted, so not here, but there about half way through).

This is where I start to let my opinions show a bit more.

The introduction by the government of an official 'National Living Wage' (NLW) is, from one perspective, a stroke of genius. By appropriating the term 'Living Wage' the ground is taken from under the feet of campaigner for a living wage: we've got it now, haven't we?

Well: have we? Not quite. The NLW is set at £7.20 for the year April 2016. The Living Wage Foundation sets the following rates for the previous year (i.e. this year) at £7.85 outside London, and £9.15 within London. So the NLW is less than the campaign's living wage: considerably less if you live in London.

The budget statement has a graph (on page 33) showing how the NLW is projected to increase compared with what the minimum wage would have been if it had continued. However it is a bit misleading, as it employs that ever useful trick, the non-zero y-axis. So here's my version... 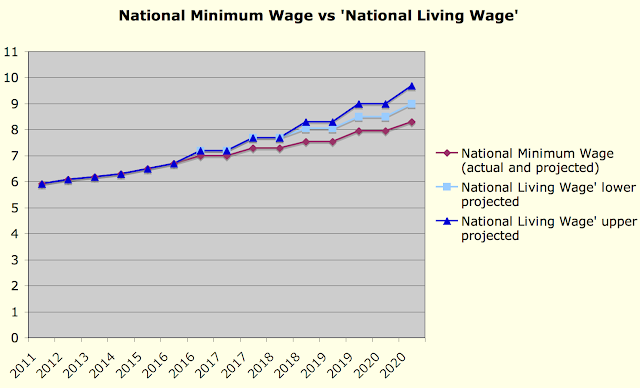 I don't know about you, but that doesn't really look like a game changer to me.

So that's why I put it in 'scare quotes': it's not really a living wage at all, just a rebadged and slightly increased minimum wage.

Removal of extra help for third and subsequent children

I've already discussed this at length in my previous post, possible-reductions-to-tax-credits, and I haven't got much to add here.

However, there's one little detail that needs noting. At paragraph 2.103 of the budget statement, the chancellor says: 'The Department for Work and Pensions and HMRC will develop protections for women who have a third child as the result of rape, or other exceptional circumstances'.

There's clearly a problem here: a woman who has a child as the result of rape will need to prove that she has been raped in order not to be penalised for having the extra child. How will she do that? The Guardian notes that Alison Thewliss, SNP MP for Glasgow, has raised this matter, asking, for example: 'How are you going to prove it? What if there is no conviction [for the rape] as happens in a lot of cases?...What happens if it becomes known in the local community that a woman is receiving tax credits for a third child? What assumptions will be made about that woman and her children?'

Keir Starmer raises a wider question (as comment in The Guardian): 'What about mothers who have a third child because of ongoing abuse within the relationship?' As he goes on to note: 'Power lies at the heart of most domestic abuse, and that includes power over sex, when to have children and how many'.

As it happens, I'm not completely unsympathetic to the government's wish to disincentive large families. However any change needs to be brought in via a much subtler tool than this one, and one that doesn't produce such problematic consequences.

What have young people done to deserve their treatment by the Chancellor? They will normally now not be entitled to any help with rent between the ages of 18 and 21, and will have extensive extra requirements placed on them if they want to carry on getting Jobseeker's Allowance or Universal Credit. They will be expected to participate in 'an extensive regime of support' from the outset of their claim: obviously 'support' here is a weasel word, which translated means 'hurdles, obstacles, meaningless check-box exercises, and opportunities for losing benefit'.

I can only assume that they are being targeted because, as generalisation, and as a result of disenchantment with conventional politics, they are relatively unlikely to vote. If the young start ever voting in significantly greater numbers, the government better beware!

And finally, that 'Merry-go-round'...


Before the budget was unveiled, the BBC reported the Chancellor as saying that 'the low paid would be compensated by tax cuts in an effort to end the "merry-go-round on which people pay their taxes and then get back benefits" and firms would be encouraged to pay higher wages'.

The first is the assertion that claimants are being taxed on the one hand, and then receiving tax credits and benefits on the other, and that this is ridiculous. This argument is disingenuous: a person on the NLW will be receiving paying very little tax anyway. There is no 'merry-go-round' here, except insofar that richer people pay tax which then helps poorer people: I may be naive but I regard that as a Good Thing.

The second issue is the - legitimate - concern that tax credits are, in effect, subsidising employers. However the implication that, by reducing tax credits, employers will increase wages to balance this, is unconvincing. So unconvincing that the government never quite says this.

So the working poor will see their income reduced, and the wealthy will be able to carry on making money. And as for the non-working poor: who cares what happens to them? You do. I do. But who else? 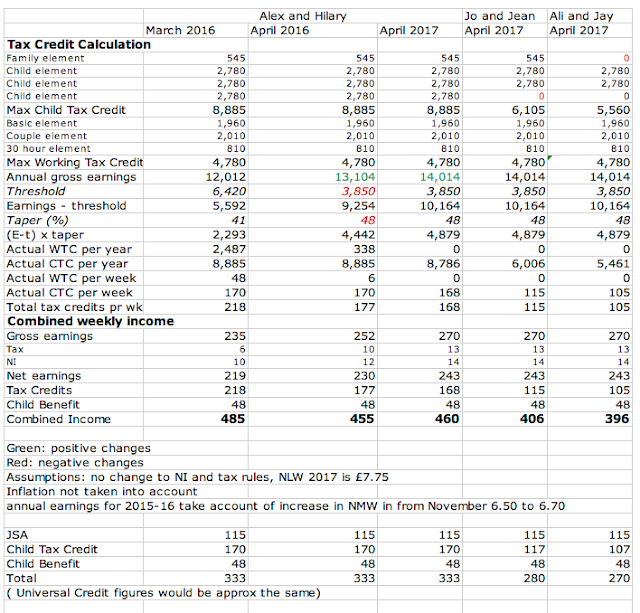 The Budget and Benefits: Part 1 - the changes summarised


In last week's budget social security was centre stage, as reducing benefit expenditure seems to be the government's preferred route for deficit reduction. George Osborne's target is to reduce annual welfare expenditure by £12billion, although his initial target for fulling achieving this of 2017-18 has been delayed to 2018-19.

But what are the details? It's easy to lose these in all the political and media spin: some changes have been given greater prominence while others have been largely ignored. I've tried to lay out all the main changes here. I've also included some things, such as the 'living wage' and changes  to social housing rents, which are not benefits but are likely to have a significant impact on many claimants.

You can look at the details for yourself. The government has published the Summer Budget 2015 here: https://www.gov.uk/government/uploads/system/uploads/attachment_data/file/443232/50325_Summer_Budget_15_Web_Accessible.pdf. Most of the benefit related changes appear in the section headed 'Rewarding work and backing aspiration' (sigh).

In an attempt to keep this to a manageable length:

General
Changes to tax credits for new and current claimants


Changes to tax credits for new claimants only

The 'Living Wage' (in my next post I'll justify my use of 'scare quotes' around this term.)

In my next post, due soon, I'll give some examples, and offer some opinions...