Let's look at the most talked about issue first: tax credits


Newspaper headlines excitedly reported the chancellor's annoucement in words like these: 'Tax credit cuts SCRAPPED in victory for working families' (www.mirror.co.uk, for example). Unfortunately the news, while good, is not that good (in fairness, later media consideration was more nuanced).

So what proposals has the chancellor reversed?

In my post of 13th July, I set out the proposed changes to tax credits as follows:

The U-turn is in respect of the first two bullet points only. The income a claimant* can receive before their tax credits is reduced will stay at £6,420, and any income they have above that figure will reduce entitlement by 41p in the pound, not 48p as was proposed.

That's great, and I don't want to poo-poo the acheivements of everybody, including myself (and the House of Lords) in effecting this change. But the other provisions remain:
Furthermore, tax credits payment rates, like those of most other social security benefits, were frozen in the budget: There will be no inflationary increase in April 2016, April 2017, April 2018, and April 2019.  The Autumn Statement reports at Section 2.2 that earnings are currently rising at about 3% and are expected to reach 3.9% by 2020. Clearly this is good news for those who are working, and, if their benefit income becomes a smaller proportion of their overall income over time, this looks like meeting the stated aim of the tax credit changes.

However tax credits are not just paid to people who are working: anyone who has children of school age or younger relies on Child Tax Credit if they have a low income. For these claimants there is no good news here.

And, even for those famous 'hard-working families', there is another problem on the horizon...


It's not happening as fast as Iain Duncan-Smith planned, but Universal Credit is inexorably spreading across the land. It is designed to replace all the means-tested benefits (except Council Tax Support) including tax credits. This means that gradually more and more people with children (for example) will be getting Universal Credit, not Tax Credits. And the changes that the Chancellor announced in the Budget are not being reversed.

In the Universal Credit system, the amount a claimant can earn before their Universal Credit is affected is called their 'work allowance'.  It therefore parallels the 'threshold figure' in the tax credit system. It differs in that only earned income is ignored, and in that there is a range of different work allowances according to different specific circumstances. In the budget many of these allowances were reduced. Let's see how this might pan out.

If you read my 13th July post, you'll remember Alex and Hilary. They have three children. Alex works 35 hours per week, and earns the national minimum wage (which becomes the national living wage from April 2016). To keep things simple, they've got no housing costs - perhaps they live in a relatives house.

As you can see from the table below, they benefit from the chancellor's u-turn if they're in the Tax Credit system: in fact their overall income rises slightly because of the national living wage, But if they're in the Universal Credit system things are very different. Because the work allowance was reduced in the Budget (for a couple who are both fit for work and have children, it changes from £123 to £91 per week), they see a reduction close to the one they would have faced had they been getting Tax Credits and the Chancellor hadn't changed his mind.

And finally, more bad news for tenants of social landlords...


In the Autumn Statement the chancellor a change to Housing Benefit for these people. From 1st April 2018, Housing Benefit payments will be capped in the same way that they are for tenants in the private sector.

Perhaps this needs some explanation. Currently, if you rent from a social landlord, the maximum Housing Benefit you can get is equal to the rent your landlord charges you (minus the bedroom tax, of course, if you are considered to have more bedrooms than you need). However, if you rent privately, The maximum Housing Benefit  you can get is not related to the rent the landlord charges, but to a set of figures set locally, dependent on your age, the size of your household, and the location. From April 2018 this same principle will apply to social housing tenants who took out their tenancies on or after 1st April 2016.

You might say, as Osbourne does, that this move levels the playing field for private tenants versus those  of social landlords. Well yes, that's true, although it's a pity - though not surprising - that the field has been levelled by digging into the high side...

Alternatively, you might also say if you are a bit more cynical) that this change simply completes the work that the bedroom tax started, in reducing the security for tenants of social housing.

If you were even more cynical, you might see this move as consistent with other changes, such as allowing the right to buy, that indicate a doctrinaire opposition to the concept of social housing.


If you want to check out the Autumn Statement yourself, you can find it here:

*For a joint claim this should be read as 'claimants' here and elsewhere: the two memebers of a couple don't have separate income allocations

The figures in the table were drawn from the spreadsheet of which the figure below is a screen grab. 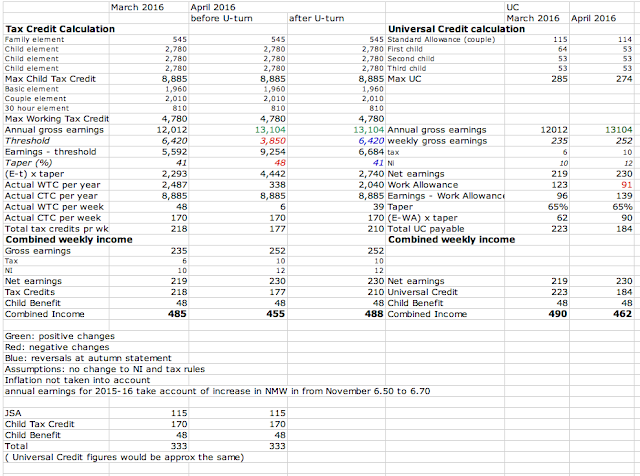